Me with one of the parts before sandblasting

The axles hanging in the garage.

The past week we have been busy with welding, taking the axles apart, cleaning, some sandblasting and painting.

First started on the axles. It needed some new mounts and brackets, so old ones off and welded the new ones on. Then painted it black to prevent rust from forming. Once we have the diffs refurbished, the final layers of painting will be put on. 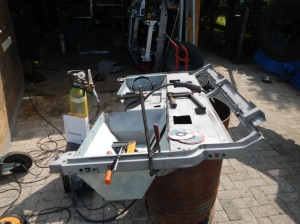 Next up was the bulkhead. It needed new footwells and after the sand blasting it showed some more bad spots. Cutting out the footwells was quite easy, welding the new parts back in not so. The parts we got from Paddock weren’t fitting properly, to less or to much material, wrong shapes. So it needed a lot of adjusting. Now waiting for another new part, the bulkhead top corner piece. It looked like it just needed a small new plate, but the welding “ate” away more and more material so we decided to replace the whole part. We also need to chance the top part of the bulkhead where the window sits on.

All the parts taken apart.

Brake calipers, after and before sandblasting.

Since the bulkhead project was on hold, we continued with the axle hubs and brake calipers. Cleaned them and now we are sand blasting them.

We also took part of the engine apart. Most of the parts looked fine, however we found a small part in the oil. In the coming days we will start to investigate what it is. Hopefully it isn’t anything major as we didn’t planned to do a complete overhaul. 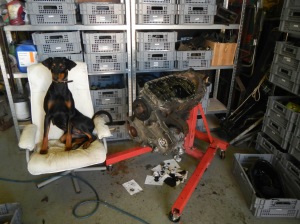 Our dog Sky watching over the engine

Don’t forget to view the link to the photos, there are more off the project there.